↓ Skip to Main Content
Home › Blog › When Does The Cast Come Off?

When Does The Cast Come Off? 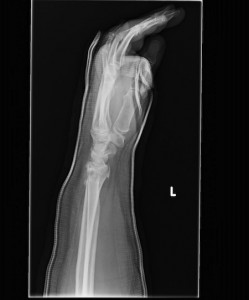 Fortunately most kids don’t need to be in their cast for longer than six weeks. Here’s what to expect.

In general, casts come off when the bone is healed.

When the bone is healed, it’s safe to put weight on the arm or use the arm normally.

Generally casts are safe to come off after six weeks.

As kids get older, their bones take longer to heal. If you or I break a bone, and the bone is set and stabilized the right way, it takes six weeks for the bone to heal.

In kids, the healing time approaches adult healing times once the child reaches 12 years old or so.

For example, in babies, fractures can be totally healed in as little as two weeks.

I recently treated an almost newborn with an arm bone fracture (broken all the way in two pieces) and the bone healed with an ace wrap in two weeks.

A question of safety

Sometimes kids won’t hurt after three weeks or so, but the bone isn’t strong enough to bear full weight or repetitive strong use. In these situations your doctor may recommend a splint to be worn for a few weeks while final healing is taking place and the bone is strengthening up.

I still use the six week mark as a general target for when it’s safe to let kids return to sports and other rambunctious activities.

The most frustrating part of having a cast is usually the frustration that goes along with being immobilized and unable to do what you want to do.

Don’t forget to ask your doctor

Starting at the beginning of the treatment, ask your doctor when he estimates the cast will come off. The decision depends on a combination of taking several x-rays and examining your child out of the cast.