What To Expect In The Office When A Cast Comes Off

This child won’t move his arm, his skin looks weird and nasty, his arm is stiff, and he’s holding it in a strange posture – what’s wrong with him? He just had a cast taken off!

Parents are often worried about what the arm looks like after the cast comes off. Even more scary is how the child behaves and uses (or won’t use) the arm after it’s off. Let’s go over what’s normal.

What to expect after a cast comes off in the office

After the cast is removed, the child will stay in the “cast room” where most cast work is done, or be put back into an exam room where the surgeon will come and take a look at things. Often an x-ray is taken after cast removal to check on bone healing.

Normal behavior after the cast is removed

Many children are frightened by the cast saw – it’s loud and the vibration is unnatural. So it’s normal for kids to be sniffling and upset after the cast is removed.

The first thing parents notice is that their child is hesitant to move the arm. If it’s healed, why won’t she move it?

This is a natural part of being immobilized in a cast for several weeks. It’s worse as children get older, and is due to the joints stiffening up while being in the cast. The lining of the joint hurts when it’s stretched as the child tries to move the arm. This improves rapidly – sometimes even in the office before the child leaves.

It’s especially surprising to a lot of parents because the child has been running around like crazy, playing normally in the cast up until this point.

Normal appearance after the cast is removed

In the following picture, you can see the scaly, peeling appearance of the skin. This child’s cast was removed about 5 minutes before this picture was taken. He was in a long arm cast (up past the elbow). 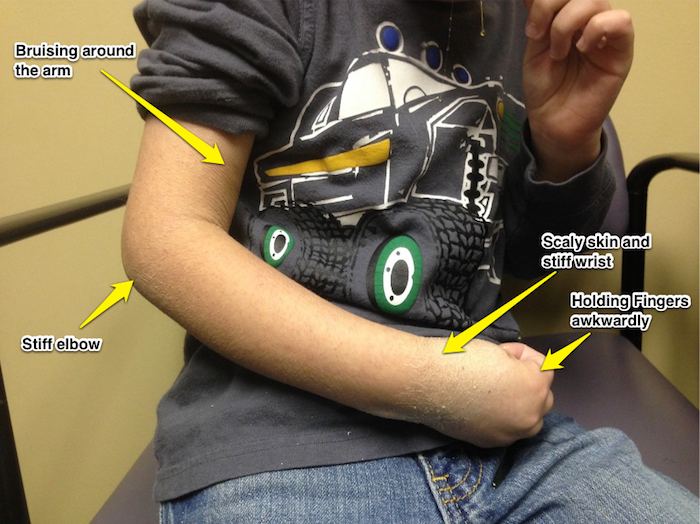 He sat in the chair in the exam room, sucking on a sucker the whole time. He was holding his arm at his side, holding his fingers in a strange, bent posture, and was very hesitant to move the elbow or the hand.

The bruising up around the arm was from the padded edge of the cast putting pressure on the skin as he played normally – this resolves within a week or so.

This behavior and skin changes are normal. This cast was in place for six weeks, but the skin changes will happen after only 2-3 weeks in the cast. This resolves with time and after normal bathing and letting the arm get some air. Lotion can help with the dry skin.