What Your Child Will Most Likely Be Doing In Her Cast 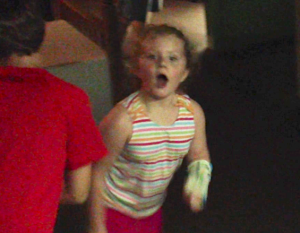 A little girl with a cast on her left arm

Will your child do what she’s supposed to do in her arm cast? I doubt it. Here’s proof.

At the end of every visit when I see a child with a broken arm, I go over some precautions and restrictions while in the cast such as:

I usually say something like: “If she’s not bored, she’s doing too much with the hand”.

Why these restrictions are important

The fractured pieces of the broken arm could move if enough force is put through the hand. Usually this only happens if the child falls or hits the cast against something.

Most of the time, the combination of early healing and the hard cast (which acts like a piece of armor) is enough to prevent the broken pieces from moving.

Most orthopedic surgeons wouldn’t recommend a cast unless they felt like it was safe for the fracture.

In the office, most children are apprehensive, painful, and are very cautious about moving their arm or letting someone else move it.

This general feeling of caution and care rarely lasts more than a few days once the cast is on.

Most kids feel better very quickly and realize that the cast is protecting them from pain.

Here’s a video of a little girl in an arm cast. It’s only a few seconds long, but notice how many times in those few seconds she puts nearly full weight on the arm, holds on tight to a bar on the wall, and falls on the arm. Amazing.

So what are parents supposed to do?

Number one, trust the orthopedic surgeon that he knows when it’s safe to put your child in a cast. He knows what really goes on with kids. If you suspect he doesn’t, be sure to educate him ahead of time.

Secondly, you know your child. If you think he or she needs extra strong immobilization (like a long cast instead of a short one), tell your doctor.

Third, if your child is using and abusing their casted arm to an extent where you’re worried they’ll re-injure the bones or make things worse, get the child into the office so the doctor can check the cast, check an x-ray, and even change the cast.

If a child is being rambunctious in the cast, other more minor problems can crop up, like cracking of the cast or the edge of the cast can start rubbing on the skin.

This video will either scare you or put you at ease when you see what your child is doing after the cast is put on. If you’re a vigilant and watchful parent (like most are), you can avoid serious consequences (which are very rare when treating kids’ broken arms).

If you have comments about the video, leave them below or on YouTube!