Removal Of Your Child’s Cast 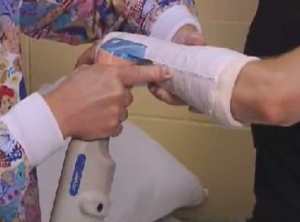 If you’ve never had a cast removed, you may be surprised at what’s involved. Here are the steps and some tips on preparing your child for the cast removal process.

Casts used to be removed by heavy cast shears or scissors. Eventually a special saw was developed which speeds up the process.

Modern cast saws are used to take off most fiberglass and plaster casts in the world. The cast saw is an electric tool with a vibrating blade that cuts through the hard outer layer of a cast.

Cast saw blades do not rotate like the saw in your garage. Rather they vibrate back and forth to create the cutting action. This improves the safety of the process and dramatically lowers risk of injury.

The major downside to a cast saw is that they’re very loud – like a loud vacuum cleaner. In fact some cast saws have vacuums attached to suck up the plaster or fiberglass particles created during the cutting process.

Other tools are used in the process, like a cast spreader and large scissors.

Steps of the process

The cast saw is turned on and the hard part of the cast is cut. Two cuts are usually made – one on the front of the arm, one on the back of the arm.

This should tickle and will be very loud. Some children are afraid of the combination of the vibration of the saw and the loud noise.

One way to prepare your child for the sensation is to hold a vibrating device (like an electric razor or clippers) touching the cast to show them what a vibrating cast feels like prior to coming in for the cast removal.

The cast cutting technique is designed to only cut through the hard part of the cast – not the soft padding underneath.

A device called a cast spreader is used to spread apart the edges of the cut cast material. This loosens the hard cast and allows the cast to be opened up like a book and the inner padding exposed.

The final step is that large scissors with a blunt tip next to the skin are used to cut the padding away from the skin. Then the entire cast can be removed and either thrown away or taken home, where it becomes a treasured family heirloom (or it’s thrown away in two years when dad finds it in the attic).

Here’s a video showing the steps of the process and a typical child’s reaction: