Itching Under A Cast – Tips For Dealing With Discomfort 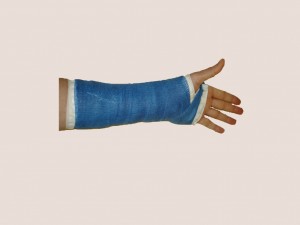 Cast on a left wrist

Itching while wearing a cast is a common problem for kids. Even adults have a hard time resisting the urge to scratch underneath the cast. Here are some tips for getting relief.

You can do significant harm by scratching your skin beneath your cast.

Never stick anything sharp or rough down the cast. It can cause abrasions that break skin open. Ordinarily this might heal quickly in the open air, but inside a sweaty cast, this can cause skin breakdown and even infection.

Don’t stick anything inside the cast that could come off and be stuck inside.

Most specialists have stories of finding pencil erasers, toothpicks, pieces of pencils or pens, or parts of toys inside casts when they took them off weeks later.

A small hard object inside the cast can cause abnormal pressure against the skin and can even cause ulcers or a deep infection.

Don’t let your child sweat excessively while in a cast.

Sweating can increase skin irritation and cause more itching.

Kids in casts shouldn’t be very active (although I know it’s sometimes impossible to slow them down) – it’s safer for fracture healing to avoid using the arm. Depending on what your doctor tells you, your child may be doing too much too soon if she’s sweating a lot in the cast.

The only way to completely avoid skin problems beneath a cast is to NEVER put anything down inside the cast, even temporarily.

Cool or room temperature air blown down inside the cast can relieve a lot of the discomfort. Use a small rubber-tipped nozzle with low-pressure air from an air compressor. Or use the cold setting on a hair dryer with a flat attachment. If your vacuum cleaner is reversible, you can put a thin nozzle on the end of it and blow air through the edge of the cast.

If you use something to scratch your skin inside the cast, make sure it’s smooth and made from a solid piece of plastic or metal that won’t come apart. Make sure you can retrieve the object so it doesn’t get stuck inside.

Over the counter Benadryl (diphenhydramine generic) can help the itching from a cast. It also has side effects like drowsiness, so ask your pediatrician if your child can take it safely.

If a cast is uncomfortable, something may be wrong.

It’s often better to head to the doctor, cut the cast off, and check the skin, then get a new cast. Reactions to cast lining or padding material are rare, but possible.